Posted on September 11, 2015 by empressofaiken 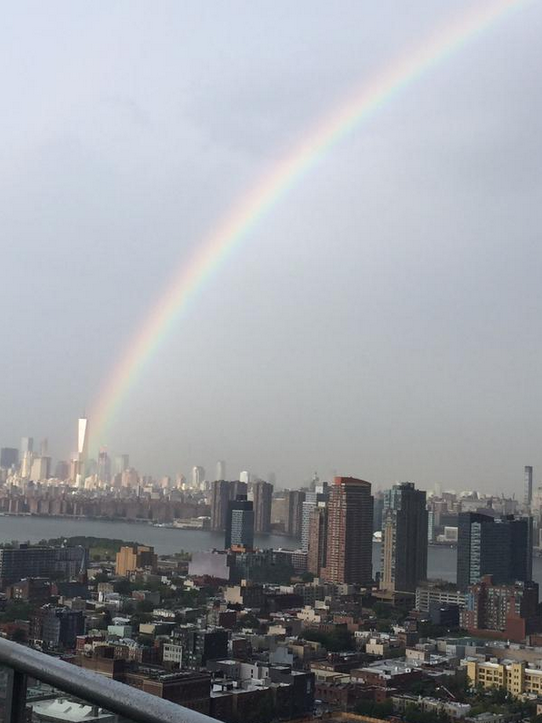 It was a beautiful morning – sunny, warm, a blue sky full of light fluffy clouds.   My husband had to go to New Jersey that morning on business and because I’d decided to take the trip with him, we had stayed on our boat in Mystic the night before.  We set out fairly early., hoping to time our trip around rush hour traffic near New York City.  We took I-95 and drove along, enjoying the day and each others’ company.   After driving for a couple of hours, we stopped at a rest stop for some coffee.  It was just about 9:00 AM.  When we went inside the Dunkin Donuts store, a television was on and a group of people were gathered in front of it.   Apparently, there had been a horrible plane crash with the plane smashing into one of the World Trade Center towers.  As we watched, though, the impossible happened.  A second plane struck the second tower.

Our minds do funny things when we can’t seem to comprehend what we’re seeing.   Rather than panicking, the small crowd in front of that TV became ever so silent.   We watched the scene and then watched it again, trying to make sense out of what had just unfolded.  Finally, one man said, “We’re under attack. America is under attack.”

My husband and I got back in our car and wondered aloud what we should do.   We weighed going back to Mystic versus going ahead as we’d planned.   Behind us were the Millstone Nuclear power plant and the Groton Submarine Base, both potential targets, and ahead of us was, well who knew what was ahead of us.  We then agreed that it really didn’t matter.   If our country had become a target of terrorists, no one place was any safer than the next.   The bridges leading into the city had been closed to incoming traffic and we were rerouted to the Tappan Zee Bridge.   It was quite some distance away and added hours to our trip, but, really, it was all so numbing that driving didn’t seem like such a bad idea.

When we finally got to the Tappan Zee, traffic was at a standstill.  One lane had been designated for emergency vehicles, and, as we sat there, an endless stream of police cruisers, EMT vehicles, fire trucks, ambulances and hearses passed us.  I think the sight of the hearses was the worst.  There were so many and we knew that they had to be coming from all directions.

We also listened to the radio, hoping to hear something that made sense.  What we heard was reporters, crying and scared.   There were reports that the White House, Camp David and the U.S. Capital had been hit.   It only made it worse to sit there and listen to these panic driven stories, so we turned the radio off and talked.  We talked about things we’d done and been through.  We told each other how much we loved each other.   My husband took my hand and said, “Whatever happens, it’s been a great ride.”  And then we held each other for a while until the traffic began to move.

We stopped again, at another rest area in New Jersey and watched another set of televisions as the towers fell.   Again, no one spoke.  The only sounds were from those who were crying  or placing orders at fast food counters, and even those sounded hushed – respectful.  We arrived at our hotel and found that we had no phone service.  The fallen twin towers, along with overloaded systems, had made calling home impossible.   We went into the bar, to get some food, and found a group of business people stranded by the no-fly order.   The only channel the hotel could get was CNBC and we watched Ron Insana, still covered in the dust which seemed to have fallen on everyone near Ground Zero, as he offered his own frightening experience to an equally shaken Tom Brokaw.

After finally getting to a working phone and calling my now hysterical Mom, we went to bed.   The next morning was just as beautiful as the day before, but, aside from that, nothing was the same.  Sure, the weather was wonderful, but, off in the distance, there was billowing black smoke in that oh so lovely blue sky.  There were no planes flying, except for military jets.

That day, and the days and weeks afterwards, will play over and over in our collective memories.   It was a national tragedy, and a shared sense of loss and grief fell over all of us.   For a while, we became a little kinder to one another, more respectful and thoughtful.   It’s my sincere prayer that,  while we may never forget the awful events of that morning,  perhaps we could dig deep and try to remember what kind of people we became in the aftermath.  What a tribute that would be to those we loved and lost.  Besides, I think the rainbow that appeared yesterday over that hallowed spot was there for a reason.

This entry was posted in In The News, Politics and tagged 9/11. Bookmark the permalink.

9 Responses to Where Were You…