Those Dog – and Kid – Days of Summer

It seems Si and Lucy have their own group of fans and loyal followers.   Both on the blogs and Twitter, a number of people have asked how the pups are doing.  So, MeltheHound and I  are bringing all of you up to date on our two newest fur friends, and we hope you enjoy the post and the pictures.

He’s been here for over six months and the way he’s staked his claim on parts of the house, I don’t think he’s going anywhere.  Since we brought Si home last November, he’s celebrated his first birthday, opened his Christmas gifts and worked his way into our hearts – never mind our bed. I’d also forgotten how much energy a young dog has and Si seems to have more than his share.  I don’t think he knows how to just walk anywhere.  Instead, he prances and dances, spinning and jumping his way around the place.  Coming back into the house, he’ll wait patiently at the back door until he spots you.  Then he springs up and down like a dog on a pogo stick.   He also has an unmatched supply of love and isn’t afraid to show just how devoted he is to us.  He follows us, well, mostly me, around – so closely sometimes, that I’m afraid if I stop short, he’ll break his nose.   He wants to cuddle, and, if he’s not getting the attention he wants, he’ll paw at your hand until you have to give him a hug.  And, despite his nearly sixty pound self, he considers himself a lap dog.  Good for him, but it’s not going to happen.

Better than that, though, is the relationship he’s struck up with Nicky, our middle dog.  This is the one that makes us smile the most, because Nicky is riddled with physical challenges and yet he let’s Si do just about anything to him.  They wrestle, but only on a rug or outdoors, because Nicky can’t control his back legs on the wood floors.  Si seems to understand this and takes his games to places where Nick can be a little more sure-footed.   When they sleep, it’s always together, with them touching one another, sometimes using each other as  pillows.   Being asleep doesn’t necessarily mean that everything’s peaceful.  Si sleeps like he lives – actively and loudly.  Not only does he chase big game in his dreams, but we also found out that he howls when he gave out one loud, long, low ghost-like howl in the middle of the night, scaring the hell out of all of us.

We really don’t have much to complain about in terms of Si’s progress as a member of the family.  The only casualty was a slightly chewed corner of a throw pillow.  There are a few more holes in the backyard because both Danny and Si love to bring gifts of moles to our door.   We don’t know much about Si’s life before he came into ours, so we’re not sure why he becomes fearful when we reach for and hold his collar.  He also sees things none of the rest of us do, spending a lot of time tracking what can only be invisible mice throughout the house.  A lot of the credit for Si’s good behavior is due to the hard work put in by our senior statesman, Danny.  Just as we’d hoped, he stepped in to show the new kid just how things are done around here.  If Si was to learn by example, then he couldn’t have had a better teacher.  As Si has improved, Danny has backed off a bit, becoming less stern and more accepting of his baby brother.  He may not have asked for another youngster to teach, but he took to his job like the champ he is.  Danny may still be weighing his options, though, because I did see him looking at brochures for boarding schools in Luxembourg the other night.  I don’t think we have anything to worry about unless and until Danny asks me for a recent picture of Si for a passport.  Danny politely refused my request for an interview as a part of this post, so I have no way of knowing if he’s serious about sending Si overseas.  All in all, I’d have to say we’re quite content with the new goofball, as he is with us.

Hello all. Melthehound here.. I was asked to contribute to this post with a Lucy update. I was getting something ready anyway so here we go.. You may remember from before that she had just been given her back yard freedom. I don’t have the ranch type atmosphere that our hostess has so my goal was just to make sure she wouldn’t run away from my postage stamp of a back yard. That has gone pretty well. She can now go out alone and she’ll come back. That was a huge victory. She’s still every bit a bat shit crazy puppy but she’s getting better.

A few weeks ago, a new element was added to her life. Two kids.. What could be better than kids and puppies, right? Nothing, on the surface..With some of this it will be easier to show rather than tell. Those who deal with kids and dogs on a regular basis will get it. Some will cringe, some will laugh.. Myself, I’m beginning to question the wisdom of having them here all at once.. Here are an example, feel free to skip to the end when you have the idea…

Si and Lucy are around the same age, though I suspect Si is better behaved than she is. First of all, he has patient parents. Second, no kids in the home (that I know of). Third and perhaps very important, two older dogs that show him how it’s done. I am sure Si is every bit as much of  puppy as Lucy though. Give a puppy a rabbit to chase, and that’s exactly what’s going to happen. Like babies, they experience the world through their mouths first and foremost. Babies aren’t 45 pound cannon balls with teeth and needle-like nails.When it’s time to play, inside or out, all three are up for the game.. Or at least she is. With them, I just listen for the screams. The following video will give a little taste..

While Lucy plays aggressively, she is not mean aggressive. I can leave the 3 of them alone 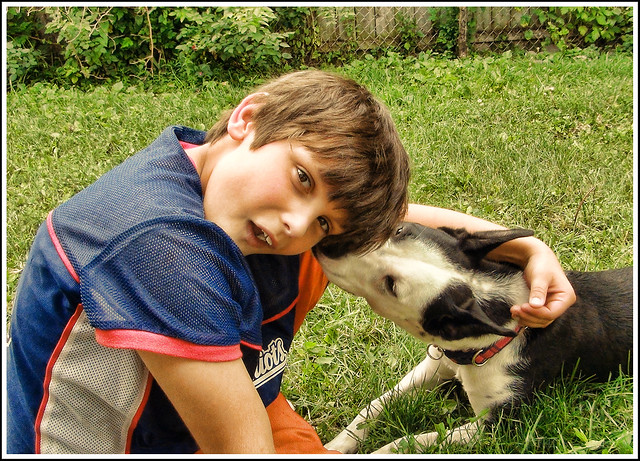 and things will be fine. A year hasn’t changed these kids a bit.. Pictures are worth a thousand words, so here’s 2000. During quiet time, unless she has snatched a sandwich from one of them, they get along just fine.. 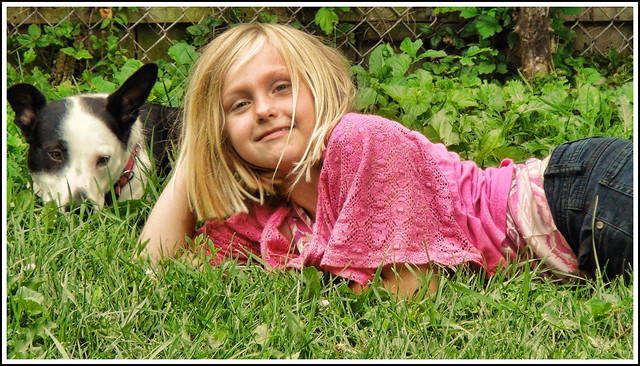 This entry was posted in Life of Si, Mel The Hound's Weekend Special. Bookmark the permalink.

10 Responses to Those Dog – and Kid – Days of Summer