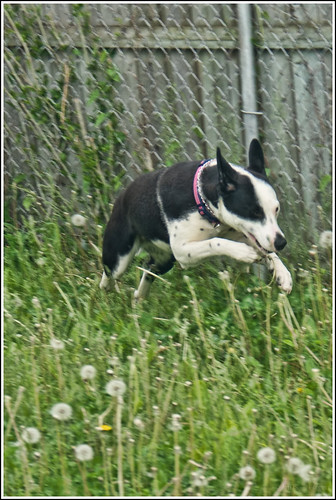 Hello Friends of Lucy.. To the left you see the second day of her freedom. Freedom from what you ask? Her leash in the back yard. It’s one of those 26 foot retractable types that until a couple days ago, I’ve required she be attached to in order to go outside. Kind of like chaining her but she’s had the full run of the back yard for the most part since day one. It isn’t a huge yard. It’s not very well kept either as you may have noticed in some pictures.

This isn’t the first time she’s run loose either. When I got her, I was told that the people who surrendered her found her stray on the street. I don’t know if I believe that. I would never do it but I’m convinced she was abused while tied on her leash. You see, If we are going to go outside, it’s either the front or back door. Out the back door she is okay with going out there and comes back in without much problem. Out the front door however it’s a wrestling match to get her back in the house. I don’t know why the difference but it’s different. Anyway, the longer she’s been here, the more convinced I am she was beaten, either at the end of or with a leash. She may never be completely trusting of one but up until now, she hasn’t had any choice if she wanted to go out.

Every morning, rain or shine, whether I want to or not, I wake up with one purpose. To take her outside. Someone tell me again about who the boss of the house is.. I’d like to know. Here, clearly, she is. She’s patient but she still has to go outside. Her path is first to the fence to evict the rabbits who have set up shop there. She can’t get to them but she’ll nearly dislocate my shoulder trying. Once she gives up on that, it’s to the back yard behind the garage to take care of her business. Then if I feel like it we go to the back yard so she can get some exercise. That includes sniffing every square inch of ground and a lot of grazing followed by a good puke. Better outside than in here. After that, it’s back inside where she is fed for the day.. That brings us to the first bout of the crazies.. Minus the pictures and theme song at the end, this is the typical routine when she first comes in. She goes right for that squeaking toy, and spends about 5 minutes tearing around the house with it. She does the same thing when I try to talk on the phone, or watch a movie, though sometimes she’ll watch the movie with me. 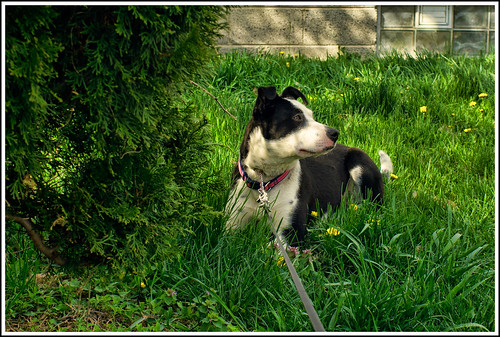 I have always felt bad having her on that leash in the back yard. From where I sit, she can actually get to the house but, she also gets the leash wrapped around her hind legs. Normally, she’ll free herself from being tangled up unless, she sees a squirrel, a rabbit, a bee, a butterfly, a blowing leaf, whatever. She will take off like a bat out of hell and forgets she’s confined until the violent jerk at the end of her leash. As I said, she gets it wrapped around one of or both of her hind legs and the other day, I was convinced she had hurt herself at the end of the leash. That prompted beginning to test her resulting in this..

For reference, the corner of the house to the back corner of the garage, is the limit of that leash, and she will do the same running on the leash. She’s learned her for now, limit. The final big test was, will she come back in the house of her own free will (with a little coaxing). 2 for 2, yes she does. I’m not ready to claim victory yet but it’s a great start.

Hope you enjoyed this quick update and we both wish you a happy Memorial day.