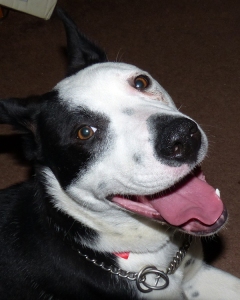 Hello friends.. A few have asked for some sort of update so I figured I would drop one on you today.. First though, I have a question.. Is it wrong that I eat hot dogs in front of my dog? Not only that but feed her bits of one when I’m done? She of course doesn’t know what it’s called and I certainly hope that it isn’t one of the ingredients. One thing I have discovered is that she does not like ketchup or other tomato based foods. A lot of dogs don’t but Melvin didn’t care. If I was giving it to him, it must have been good and therefore, a treat. She also does not like onions or lettuce. But, she grazes in the back yard like she’s a cow. That’s okay though.. Maybe she’s trying to tell me something. The onions and lettuce come on the whoppers I usually get a burger king when I’m feeling lazy. You see, her job as was Melvin’s, is to preclean the dishes for the dishwasher and clean up whatever I drop while eating the junk food. Probably just as well, I’m not supposed to eat that stuff and it tastes kind of terrible anyway… Certainly doesn’t have that flame broiled taste it’s supposed to have and I don’t think I ever saw a Real hamburger patty fold in half without breaking. Maybe it’s just this particular franchise.. The only thing fast about it is the rate it travels through  me and it’s too damn expensive so, maybe it’s a win win.. I’m not eating the fast food, don’t have to clean up whatever spills out that Lucy won’t eat, and I save some cash for better tasting food that both of us like..

Inside the house, she’s my best pal. She follows me everywhere. If I lay down on the couch, she’s under the table  that is in front of the couch. At the very least, under the table that the TV sits on so she can keep an eye on me. She answers to her name or at least the sound of my voice. Outside, it’s a completely different story. She has to be on her (long) retractable leash because she does NOT answer to her name and when I call her, she gives me this look and rolls her eyes at me as if to tell me to fuck off. I don’t know.. Maybe it’s the leash but it’s actually long enough that she can get to most of the back yard  with it. It isn’t a huge yard. I’ve let her run loose back there a couple times and for now, she stays within whatever the confines of the leash is. Then again, she’s still a puppy and a strong willed one at that. She has no idea the freedom she will have when she starts answering to her name when called..

Many of you will remember my charges from last summer. They had spring break last week and spent a day over here, with Lucy.. Lucy loves meeting new people but I’m still unsure how she is with kids.. For the most part everything went okay and she loves to get on the couch with them, though I spend most of the time bitching at all 3 of them making her get off the couch..

We went outside so the kids could do their job cleaning up after Lucy. Everything was fine until they finished and I turned Lucy loose so the 3 of them could play together. Turns out Lucy is an ankle biter. That is she went right for both of them and began chewing at their ankles. Not enough to draw any blood but enough to concern me about leaving them alone together. It’s some thing that will have to be watched until I’m sure either way. Inside, she likes to wrestle with them. They lay down on the floor and she lays on top of them. I’m sure a lot of this is just the newness of it all and the puppy in her.

Grand nephew brought his xbox 360 with him. We spent 20 minutes hooking this thing up so he could play his games that have online groups. This involves hooking him up to my cable router and he has a headset that plugs into his controller so he can talk with his commando buddies online. All fun if you’re into that sort of thing I suppose. I had told him when he isn’t using the stuff to keep it where Lucy could not get to it. In fact, I told both the kids that whatever they leave laying on the floor, she is likely to get, and destroy.. Well despite his best efforts to conceal his stuff, while we were out on a pop run, she found his headset and turned it into a bunch of little black pieces. She also ate the cable that connected his xbox to my internet. I have the feeling, she was just getting started. So that prompted a trip to the local second hand place to replace what she destroyed. I promised him that would be the only time, I replace any of it. It’s up to him to make sure she can’t get to his belongings.

Overall, the meeting went fairly well.. A few lessons learned by all involved though I suspect, I am the only one who will remember them. First and most important, I kind of already knew this one, she doesn’t like to be left alone. Aside from her bedtime that is and I am not even certain about then. Probably more important and again, kind of already knew this one…. Don’t leave her alone with the kids until she outgrows some of that over zealous puppy play. She doesn’t realize she’s a 40 pound cannonball with teeth and sharp nails on her feet.

Lucy has a morning ritual. We go outside so she can take care of her first morning business. Then, if it’s nice out, I sit down so she can run around the back yard (on her leash) a little bit. We come in, I feed her and make sure she has water for the day. Then, it’s time for her to go ballistic. In the video below is a sample. Sometimes this will go on for an hour or until something else occupies her mind.

See you next time….

Fuck Cancer
View all posts by MelTheHound →
This entry was posted in Mel The Hound's Weekend Special. Bookmark the permalink.