Saturday Special – This dog is nuts..

Hello, It’a Saturday again, and yes, I’m still here. I have read time and time again that those who make online frienships only do so because they cannot make them in real life. The same people who say that will also tell us that those online friendships are worthless. I am back to tell you, I could not disagree more. First of all, you are all great to talk to and even sometimes argue with. As long as the arguments are about subjects no one really gives a shit about such as the state of the psuedo celebrities.

A couple weeks ago as most of you know, I had to say goodbye to Melvin, my companion of 13 years. I made an announcement here just to let everyone know, he met with a peaceful end. I am absolutely stunned at the outpouring from you all. None knows how much it meant to me.. There were even offers to help get a new furface to take Mel’s place, one of which almost resulted in a successful adoption. Due to logistics and distance it didn’t quite work out. None of those things was insurmountable as an anything it took offer was made.. In the end though, it turned out that a local adoption was probably best for all involved. With that, I went today to the same shelter I got Melvin from all those years ago. I didn’t plan on walking out of there with a dog, just to have a look-see. I saw several candidates, all of which needing some help of some sort.  Say hello to Littlebit.. I will probably change her name, kind of leaning towards Lucy… She was wearing one of those cones when I first saw her, apparently she liked to chew her tail. I removed the cone when I got her home though, so I could see what she really looked like.

The adoption paperwork says she is 9 months old, about 25-30 pounds, and….. wait for 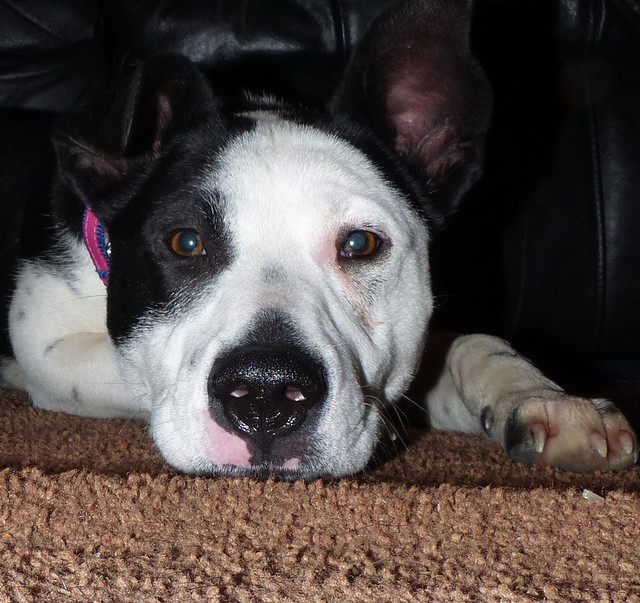 it…. a Border Collie…. Go ahead and laugh, I’ll wait. I’m going to be mean and say what I really think. The people at this Michigan Humane Society branch. have got to be the dumbest people on the face of the planet. How the hell anybody could look at that face and get, Border Collie, is beyond me. She may be mix with something somewhere but that, is a pit bull. They also told me she’s housebroken but so far, the only place she’s gone, is in the house. Whether she wants to be or not, she will be crate trained. They also told me she was, or in progress of being crate trained. This isn’t quite what I wanted but she’s here now.. Only problem right now is I don’t know if I can handle her on a leash. First attempt at walking her nearly face planted me on to the concrete.. She is a strong little shit… That’s what I’ll call the bad.

On the upside, in the house, she’s extremely loving as long as she’s occupied. She Is a puppy still after all. Melvin had a collection of bones, from steaks, that we kept under the TV.. Once she began to settle in, she proceeded to toss them all over the house. She doesn’t shy from the camera and will even pose. She isn’t a barker unless she sees something. I suspect that as time moves on, she’s become a little more vocal. She doesn’t jump on the furniture but picks a spot and lays down. She can sit and stay without jerking her around by the neck. She wasn’t too impressed with the cookies I bought for her but maybe it’s just a matter of taste. The fact she made business in the house, may be partly my fault. She may have tried to tell me she needed to go out while I was back here playing with pictures and I just didn’t get the signal.. Melvin never told me, he just waited until I let him out and took care of business while he was out there.

Kind of a funny story.. I’m, diabetic and sometimes I begin to lose balance especially if I have been on my feet for a long time. When I told the people at the shelter I would be taking the dog, I went out to my truck to have a smoke while they began the paperwork.. Apparently I stumbled a bit as if I were drunk.. The case worker and his manager came out to make sure I knew what I was doing because ‘they’ detected that ‘I may have been under the influence’ of something, drugs or alcohol, and they weren’t going to let me take the dog. I found that quite insulting, them suggesting that, rather than making any effort to find out if there may be a health reason for my apparent behavior. Not to the point of leaving the dog though..

I just hope she doesn’t start chewing her tail again because there is no way in hell that cone is going back on her. I’m sure she’ll mellow out some once she’s been here a little while and we get to know each other a little more.. If nothing else, should be an interesting ride 😀 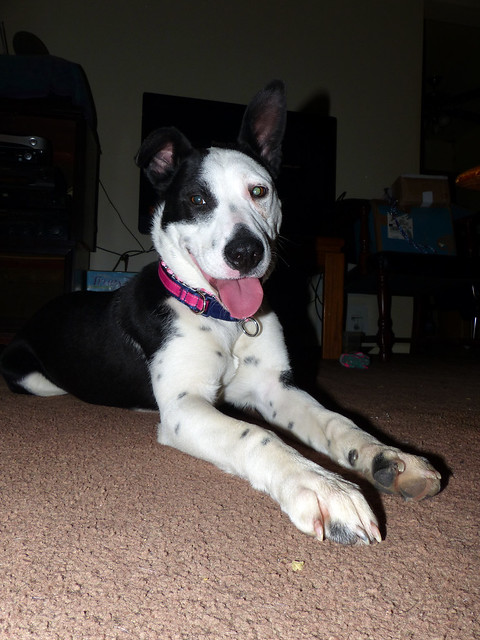 Fuck Cancer
View all posts by MelTheHound →
This entry was posted in Mel The Hound's Weekend Special. Bookmark the permalink.

77 Responses to Saturday Special – This dog is nuts..