Posted on March 3, 2014 by empressofaiken

This is the only pair of survivors of the prison attack who haven’t come across another single soul, which is surprising considering that Daryl knows how to track as well as having more than a passing familiarity with those woods.  They spend a night inside the trunk of a car, waiting for some walkers to pass on by.  When morning arrives, they gather a few usable items and start back down the road.  Daryl has a particularly bad attitude, working on auto-pilot as as he hunts for food, shelter and safety.  Beth is the one who seems to be the determined one, while Daryl broods and only grunts out responses to whatever Beth is saying.  He kills a snake, skins it and chows down on what Beth calls snake jerky.  It’s things like this that remind me how I’ll never be able survive any kind of apocalypse – even if that thing tastes just like chicken, I’m not having any part of it.

Beth wants something to drink, and not the water Daryl tosses at her – she wants her first taste of alcohol.  Hershel didn’t approve of drinking, but Beth figures this is as good a time as any to break the rules.  No one would blame her.   She wanders off on her own, only to come across some walkers.  She takes care of them, and Daryl shows up to haul her back to their camp.  When she resists, they leave and find themselves on they grounds of the Pine Vista Country Club.   There are a few walkers waiting for their tee time, so Daryl and Beth head for the clubhouse.  The front door is locked, but they find another one open.  Inside are scores of what must have been club members, now zombified, with a few who had hanged themselves.

They begin to search the building, looking for anything they can use, and Beth comes across a bottle of alcohol on a shelf.  As she turns, a walker approaches and she manages to finish it off.  Daryl walks up to her and she angrily says, “Thanks for the help.”  Daryl says that she didn’t need his help, she said she could take care of herself and she did.  They enter the pro shop and Beth finds some pretty new clothes which she immediately changes into.   A dead woman is positioned on a mannequin with a sign reading “Rich Bitch”.  Offended by the disrespectful display, Beth wants to take the woman down, but Daryl says it doesn’t matter because she’s dead, so he just covers the body with a blanket.  A clock chimes in the hallway, rousing some more walkers who enter the pro shop.  Daryl takes them out with a knife except for one – that walker is beaten, over and over, by Daryl with a golf club, sending pieces of the walker flying all over the place, including onto Beth’s new shirt.   It’s not exactly his style, but Daryl isn’t Daryl right now.

They go back downstairs and come across the bar and dining room.  She tells Daryl that she knows he’ll think it’s stupid, but she really wants that drink.  He can go smash all the walkers he wants, but she needs some booze.  All she can find is a bottle of peach schnapps, which Daryl finds a little off-putting.   As he throws darts at pictures of the club’s members, Beth starts to cry.  Daryl smashes the bottle and says, “I’m not gonna let your first drink be peach schnapps.”  Instead, he takes her to a house in the woods that he and Michonne had found.  Inside is a still and a good supply of moonshine.   Beth has her first drink, tells Daryl that it’s the most disgusting thing she’s ever tasted and asks Daryl to join her.  He doesn’t want a drink, yet.

Beth looks around the cabin and finds a pink planter shaped like a bra.  When she asks Daryl who would own something like that, he tells her that his father would.  The cabin is much too close to the kind of place he grew up in and he describes similar furnishings like a junkyard recliner.   They spot a walker outside and decide to make the best of things by drinking some more moonshine.  Beth wants to play “I never” where the other person has to take a drink if they’ve ever done whatever it is that the first person says they’ve never done.  She starts by saying that she’s never shot a crossbow and Daryl takes a drink.  Daryl says that he’s never been out of Georgia or gotten an education and Beth takes a couple of gulps.  Beth then says that she’s never been in jail.  Daryl doesn’t drink and asks her if that what she thinks of him.  She asks him if he’d been a prison guard before everything happened.  He tells her no and gets up to pee.  Daryl starts shouting, “I’ve never eaten a frozen yogurt or had a pet pony or had someone care for me or cut my wrist to get attention.”   She hit a nerve and Daryl hit back.

He’s so angry that he goes outside to show her how to shoot a crossbow and uses the solo walker for target practice.  Beth can’t stand it and stabs the walker in the head.  She then screams at him for giving up, that she may not be Michonne or Maggie or Carol but she made it anyway.  She tells Daryl that he’s afraid to get too close to anyone.  He tells her that none of it matters because everyone they knew, or cared about is dead and they’re never going to see them again.   Then he finally tells her what is really eating away at him – that he could have done something more during the attack on the prison and that Hershel died because he didn’t.  When he starts to cry, Beth puts her arms around him.

Later that night, the two sit on the porch talking about their live before the awful event that sent them into a new world.   Daryl tells her about an incident at the home of their drug dealer – a “tweaker” – where they were drunk and watching some cartoon on TV.  They started to make fun of the cartoon, not knowing that it happened to be the favorite show of the dug dealer’s son.  Punches were thrown and guns were drawn.  Daryl took a punch to the gut and ended up puking – and the whole thing was over a cartoon about a talking dog.  He then tells Beth that all he was and all he did was follow his brother, Merle, around doing whatever he was told – “just a redneck asshole with a bigger asshole for a brother.”  Beth tells Daryl about the kinds of things her family had looked forward to, like getting married, having babies and seeing their father become a grandfather, getting old together.  He says that that’s how it’s supposed to be. Beth then tells Daryl that he’s “gonna be the last man standing. You gotta stay where you are, not who you were.”   He asks her, “What if you can’t”, but she says “You have to before it kills you.”   He then says that they should go inside, but Beth wants to burn the house down.  So they go inside, douse the place with moonshine and light a bundle of cash with a match.  As they watch the house go up in flames, they salute it and the demise of Daryl’s past by flipping it off.

The walkers took a back seat in this episode, and Daryl and Beth stepped forward – not quite as quiet as they were before – a nice reminder that the walkers are only props, the necessary threat,  in a show that’s really all about the people who survive.

I fully expect this to be Carol’s first comment, if and when she meets up with the rest of the group. 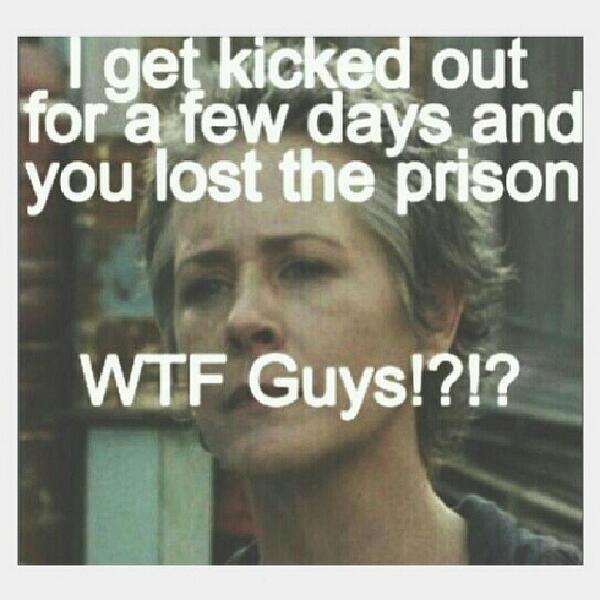