Posted on January 21, 2014 by empressofaiken

Then she and Carlton argue over who should get “nakey”.   “You get nakey”  “No, you get nakey.”  “Let’s all get nakey.” Let’s not, okay?   Carlton and company get downright giddy as the women do their best to please them and I can’t help but be embarrassed for all of them.  Thanks to Carlton, we all now know that being a Wiccan requires awesome skills on stripper poles.  It’s all very educational.

Kyle is helping by watching her personal chef prepare Shabbat dinner.   Her sister-in-law, Sharon and Sharon’s husband Kendall are there.  They then discuss Sophia’s upcoming Bat Mitzvah and their hopes that it won’t turn into something resembling a Karadashian wedding.

Brandi is dealing with a new rescue dog, Buddy, who isn’t trying hard enough for his mew mistress when it comes to his training.  He lifted his leg and peed on her comforter.  Get it together Buddy.  You’ve been at her house for an entire day and you still don’t know how to live according to Brandi’s expectations.  If you don’t shape up, she may dedicate a podcast to your failings or you could just go missing, like Chica.   Brandi is so upset that her life isn’t normal – as if anything in Brandi’s life could be described  as normal.  She’s crying to Lisa how her dog disappeared and her kids are…something – I don’t know what she was saying but it was really, really bad.  Her dad isn’t talking to her because she outed him for growing and selling marijuana to dealers when she was growing up.  I thought it was about her Oscar gown.  Does that mean the truth cannon is shooting blanks?   She’s going to her hometown of Sacramento for a book signing, and hopes that she and her dad can patch things up.

Brandi and Yolanda arrive in Sacramento and Brandi tells her replacement for Lisa friend all about the gangs that roamed the streets when she was growing up.  Shootings were the norm, according to Brandi.  Why should we doubt her?  She hasn’t tried to fool us or exaggerate anything yet, has she?   Once they check out their suite, leaping from the bed as if it was on fire after finding out that Arnold Schwarzenegger stayed there, Brandi calls home.  He dad happens to answer, but quickly passes the phone to Brandi’s mom.  Mom asks Brandi not to bring up the same things that got her in got her in hot water with her dad in the first place, but it’s just a wasted warning.

The book signing begins and Brandi’s family is in attendance.  After a few greetings, her brother escorts his kids out of the room so that Brandi can be Brandi.   Afterwards, they gather at a restaurant for dinner and Brandi, of course, has to start yapping about pot.  Dad isn’t thrilled with his daughter’s conversation and says that they should cut it right there while motioning for it to stop.   Yolanda, who was brought along on the trip to negotiate a peace accord is doing her level best to convince dad that Brandi is a good and successful girl.  He looks as skeptical as the rest of us – on both counts.   Yolanda has also brought along a stack of DVDs, featuring her love, David Foster and the artists he’s worked with as a gift for Brandi’s dad.  By the way, in case David thinks his Star of Fame is a big deal, I found another celebrity who also has one.  Trust me, Grumpy’s huuuggge on Twitter.

RealGrumpyCat
Hollywood. I hate it. 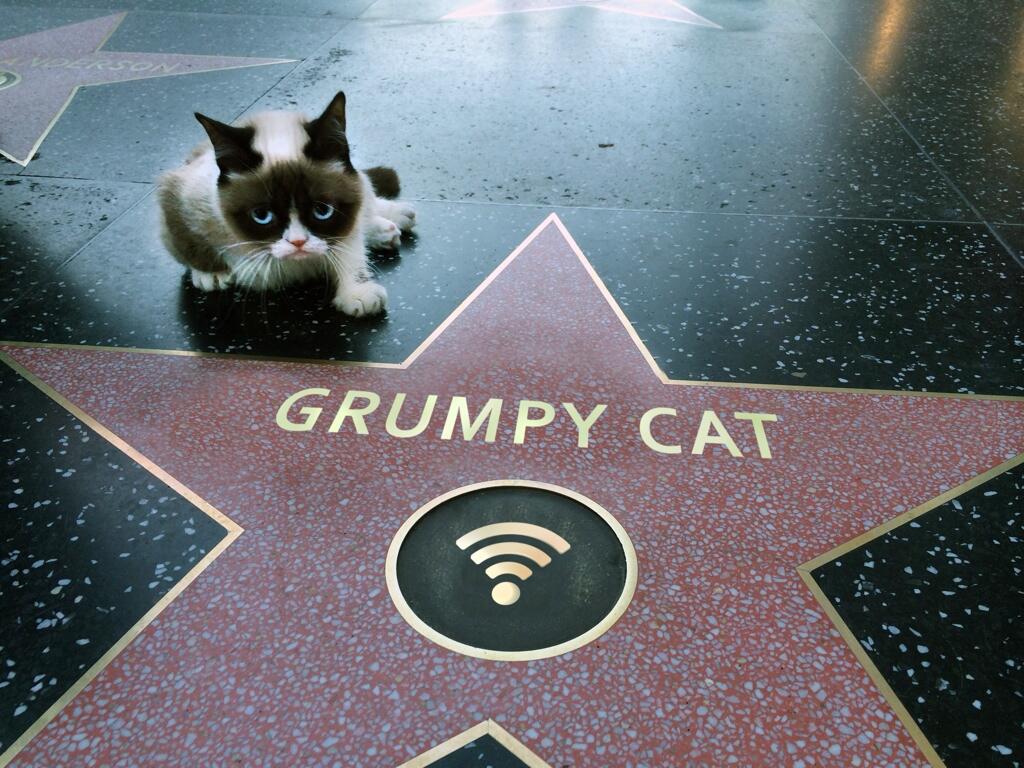 When asked which kind of shot would best represent Sacramento, Brandi bellows “Kami-fuckin’-kaze, bitch!”  I can see dad’s proud and tearful smile from here.  That announcement sent her brother hustling his kids away from their aunt for a second time. After dinner, they head back to the hotel suite, so Brandi can show her family how far she’s come.   She and her father have a moment, out on the balcony where they exchange a hug and say “I love you” to each other, but dad admits that they have a lot of work to do before their relationship can really move forward.

Joyce and Yolanda take us to the mean streets of Beverly Hills – or a segment right out of the Real Housewives of Beirut.   Joyce would have us believe that she needs to learn how to shoot a gun because masked men, carrying shotguns, took a stroll up her driveway one evening.   Thankfully, her dogs scared the bad guys away, or we would never have had the pleasure of watching Joyce try to kill her instructor.   Don’t point the damn thing at anything other than the target, okay Joyce?  Better yet, get an alarm system because I’m now more afraid of you and your revolver than I am of the guys – real or imagined –  who attempted an assault on Casa Ohoven. Yolanda tells us that she suffered an even more frightening incident when a gunman entered her house while she was naked and nursing baby Gigi.  She took chase after him but he got away.  Does this mean that anybody can just walk into Mohamed Hadid’s house?   I’m shaking my head – seriously.  Beverly Hills is worse than Brandi’s Sacramento, to hear these ladies’ stories.

Hell-bent on keeping the ladies safe from even more attacks, Joyce has arranged for some self-defense classes at a gym with a trainer named Lars.  He makes the mistake of showing them how to put someone in a choke-hold, but does tell them that when he taps their arm, they have to let go or they’ll kill him.  Yolanda handles this as well as Joyce did her gun and poor Lars turns several shades of purple before Yolanda translates “tap, tap” from English to Dutch and lets go.   Now, they’re going to box.  Why?  Really – why?  Bad guys don’t box.  They grab you and hurt you unless you deliver some serious pain to them first.   Oh well, Carlton gets in the ring, after telling us that she’s been in fights before, and looks like a fool.  Lisa tries next and manages to make contact with Lars’ jaw.

Kim and Kyle box with one another, then kick each other, then wrestle until Kyle ends up on top.  I’ll leave you with the psychology of that to ponder on your own.  Brandi wants to show off her bad-ass self and punches Lars in the head, hurting her hand in the process.  Brandi, not for nothing, but you might want to rethink knocking Joyce’s fuckin’ teeth out.

Brandi, Lisa and Kyle get into a limo and head out for lunch.  Lisa keeps insisting that Brandi have her hand looked at by a doctor, but Brandi has a tantrum.  “I’m a big girl.  I don’t need no stinkin’ restaurant owner tellin’ me what to do.  You  ain’t my mother.  Now, I’m going to hold my breath until I pass out.  Then you’ll be sorry.”  So there.

14 Responses to The Real Housewives of Beverly Hills – Tough Break