Sons of Anarchy – S6E13 – The bitch slithers away again 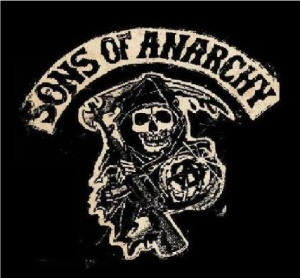 Here it is folks. The last one of the season. Let’s review where we’re at for a minute then I’ll get to the important parts of the show.

Clay is dead and Jax is making moves to hand off distribution of guns to August Marx. Juice has told Nero what really happened to Darby after he nearly died of an overdose at Deosa. Tara had made arrangements to meet with the DA and the ATF but instead of showing for the meeting, She took the kids and checked in to a hotel. Jax and Mommie Dearest are now convinced she has flipped. Let’s take this one story at a time.

First, the show opens with Jax sitting at Opie’s grave writing to his boys. In essence he tells them that he thrives on the fear he wakes up with every day. That everything he does, has done, and will do that day, is for them because he loves them.

Clay- Not much to say. Jax shot him in the neck for his crimes against him and the club and today he receives a prison burial with only Unser in attendance. I doubt Clay knew the difference but it’s still a sad way to end up. At Jax’s house where Gemma is doing dishes, Unser arrives to pick up Wendy to go to rehab. Gemma seems all broken up that her second husband is now dead too.

At the clubhouse, they are going to have a meeting. First though, Eli and DA pay a visit. She wants to speak to Jax alone but not before Mommie Dearest tells DA to suck her white crack. DA tells Jax that Tara was supposed to meet with her but she was a no show. She further tries to get under Jax’s skin trying to appeal to appeal to his family man ways. At the meeting table, they decide they need to find Tara before the DA does. They will talk to Margaret, watch her lawyer after Unser tells who it is (I wish this guy would stop thinking with his dick) and they will also see if Charlie (dirty cop) can help. Jax doesn’t want her hurt unless they cannot convince her not to rat.

Alvarez pays the club a visit. He wants to know why he wasn’t offered a shot at the guns. Jax tells him that the club leaving guns was the intent all along since he took the gavel. Alvarez tells Jax that he is setting up a charter in Stockton. News to Jax. There is a shipment of guns due to the Mayans that is late due to all the shenanigans of Jax trying to insure that Marx now owns the distribution. They will meet later in the day to make that right, and everyone happy. Nero will be part of this because he and Alvarez are kind of working together.

They all meet at the docks to get the delivery of the guns. Nero is there, I guess Marx was supposed to be as well but he keeps himself insulated from the street dealings. Nero speaks to Jax about karma and wonders if he thinks all the bad stuff happening with Tara might have something to do with Juice murdering an innocent mother at Jax’s order. Jax tries to worm his way out of that again but Nero isn’t buying it this time. Alvarez gets his guns and pays for them with a bag of groceries. Before the black guys can say wtf, the Mayans kill all of them and take the guns. I guess Nero is okay with this as he helps them load the guns. Later we see him and Alvarez sitting down talking about the old days when the were in prison together. He wonders about Nero’s plan to buy that farm. Nero says he has another consideration now, that he’s with Gemma.

Tara reaches her lawyer and tells him where to meet her. He says the deal is still on the table but only if it happens that day. As he leaves the court house, Bobby and Juice follow him. They meet at a park in Lodi that Jax knows and he tells them to not let her leave. The lawyer and Tara arrive, he shows her the paperwork, tells her it’s all legit, and everything is good to go. She tells him where DA can find her. He leaves, the club arrives. She’s scared shitless but Jax tells her he means her no harm. They make an arrangement where he will turn himself in as the source for the KG9. When the DA arrives at the hotel, that’s what happens. The deal is made and he will turn himself in at his home, at 6 that evening after he puts everything in order. The boys have been taken back to the IC parlor clubhouse.

There is a meeting with Jax, Bobby, and Chibs. Jax tells them what is going to happen. He hands the gavel over to Bobby. Then he tells them that Juice cannot be trusted and why. Outside of the clubhouse, Jax puts his arms around Juice, kisses him, and tells him he knows that Juice betrayed him.

Somewhere in all this, at Deosa, Gemma is waiting for Nero. He arrives and his basic question for her is, would she leave all this, the club, Charming, all of it to leave with him. When her answer is no, he tells her to hit the bricks. He dumped her, just like he should have that first drunken night when he was thinking with the wrong head.  She leaves and goes to her home to wallow in her misery. While she is there, drunk and high, Unser comes in after leaving Wendy at rehab. She wants to leave and go to Jax’s house but he won’t let her drive. She distracts him with a shiny object and tells him she needs her pills. He goes to get them, she steels his truck to leave.

At the clubhouse, Jax is saying goodbye to everyone, and his kids. Tara will pick them up after the deed is done. He wants absolutely nothing to happen to her and whatever she needs, she gets.Even if she wants to take the boys and leave. At Jax’s house, Tara has arrived. Unser’s truck is there. I don’t remember the exact sequence of events but, Eli and Juice are also there. Tara is in the house, thinking Unser is there, hears a noise, and it’s Gemma. Juice by now has told Eli that Gemma had taken Unser’s truck. The hear a ruckus. By the time they get inside, Gemma has drown Tara in the dishwater and stabbed her with a carving fork that was in the dish tray. As Eli is standing there in amazement, Juice shoots him.

After Juice and Gemma have left, Jax arrives to find the dead sheriff, and his dead wife. He drops his gun next to Eli and as he his holding his dead wife, crying, DA walks in and sees the scene. She of course can only make assumptions at this point but we are left with the belief she thinks Jax is responsible for all this. That is about where this season ends.

See you next fall.