Weekend Special – Adventures In Babysitting – What Was I Thinking – Pt1

Hi, Everyone. I hope this finds you well and you’re all enjoying your holiday weekend. Back in mid-July, I got a phone call from my nephew. He doesn’t owe me any money and there are no holidays or birthdays coming up so what could he want? Turns out he was unhappy with the way his sister was watching his two kids. Always fighting in front of them, foul language, and constantly harassing him for money. She has 3 of her own and as I had recently learned, a step daughter. I’ll get into that one in another post. I’ll just say here for now, she knows how to pick them. 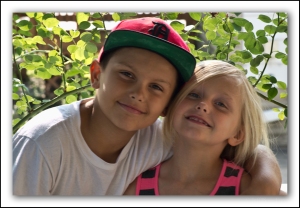 Anyway, Nephew has decided to become a full time student again and go to working part time at his regular job. He’s a physical therapy assistant and he’s gone back to school to get his full ticket as a licensed physical therapist. While he can pay for it, he really cannot afford daycare as a result. At the time he was fighting their mother in the process of trying to take away her visitation to the kids. Some of you may be thinking that is awful but the awful part is her being in their lives at all. She’s a constant disappointment to them and has resulted in a lot of anger issues in the older kid (10). In my astute and usually correct observation of her, the only thing that keeps her from being a complete pig is the missing curly tail. Since I have never seen her without pants, I’m not even so sure she doesn’t have one. It’s been close to 3 years since I saw her and I’ll be happy if that trend continues to 50 years. Bottom line here is nephew didn’t want to trust their mother with the kids (I got stories).. So, since he was tired of his sister’s antics, didn’t trust their mother (still doesn’t), and their grandmother (my sister) is too busy at work to keep the kids, he called me. As a last resort. He asked if I would watch them during the day for the rest of the summer until school started. What was I going to say? No? I guess I could have but for him to call me, he had to really be stuck between the rock and a hard place. I said yes thinking, how difficult could it be. Let them sit on the couch and watch TV and go on about my own business. Silly me.

The first day of reckoning had arrived and I was at the time, without a car. Didn’t matter much, I didn’t need to go anywhere and if I did, what I need is within walking distance. That is, I can walk there and back without having a heart attack from the strain. The kids arrived hungry and thirsty so that first day, we went to 7-11 for cold drinks and something to eat.. Naturally, they didn’t want anything I had. While there, I made mistake #1 and let them buy candy. Well, I let the 7yo girl buy candy, the 10yo boy wanted donuts. I don’t partake in either but I should have known better. I use to watch nephew and his sister once in awhile and I did grow up with a younger sister. I should have remembered what happens when two kids don’t have exactly the same thing. Those of you with only children may have never experienced this. To get the full effect, there has to be two or more. Remember that part..  It’s very important. Here is a taste of the first day after we got back from the store.

Actually that’s a taste of every day minus the sweets. Sometimes they came through the door acting like that, other times it took a few minutes. I know they are just being bored kids. When my sister and I were kids, mom and dad would take us for drives to a state park or something like that and wear us out having us run around. Remembering that, there came many trips to the local park for the kids and me. There they discovered jumping off of the swings as I took photos of them.

Never fear folks, these kids are monkeys when it comes to this kind of stuff. She can easily lift her own weight and so can he. Even though, she tried to pretend like she couldn’t.. She will hang from a bar for an hour crying and whining that she can’t get down while you’re looking, then as soon as you turn your head, she either jumps or climbs down the nearest support post. I just let her scream. One thing I was rather shocked to learn is that no one had ever taught them to wax a slide. No one ever gave them wax paper and told them to sit on it while going down the slide. Maybe that isn’t or wasn’t a common thing but these two at least once got that experience. Luckily, it wasn’t too hot but the only person worn out by going to the park, was me. We usually walked there unless on the way back from somewhere else.

The first day they were here, I told them they would have a job to do. Once they guessed what the job would be, they wanted to know for how much money. The job still pays $5 for the entire yard just like when their dad did it as a kid. With Melvin’s predecessor though, it was usually all in one spot near the fence in the back of the yard. Melvin, isn’t that tidy and goes wherever he’s standing in the grass when the feeling hits him. So now the job is a bit like a mine sweep. You know, Land Mines. Writing this post at a blog affectionately known as “The Farm” I doubt I have to explain what land mines are. Watch the video if you still don’t know.

There are two ways of doing this job, With tools (A rake and a shovel) which is the way I do it, or by hand, which is the way I let them do it (by their choice). It’s probably easier to do it that way but I have a serious gag reflex set off by even some of the smallest smells. So, on their first day of work, they got the blue neoprene gloves and a couple plastic bags and sent on their way. After they finished, the brought the bags in to the house to show me. Yeah, they thought I needed to see that they had earned their $2.50 each. Trust me, I didn’t need to verify anything. This was a weekly job and the video you see is part of one week. Aside from the money, one way to motivate them is to turn a job into a contest. That has it’s own problems but challenging them to pick up the most, seemed to work pretty well. I will tell you, if you’ve never witnessed this, there is nothing funnier than watching two kids argue about who picks up what turd… When they said they couldn’t find it because the grass was too tall, I told them to pretend they were looking for money. That seemed to do the trick.

I was going to do this all in one day but I’m going to save the rest for later and I’ll see you next week with part 2. Until then, peace. MTH.