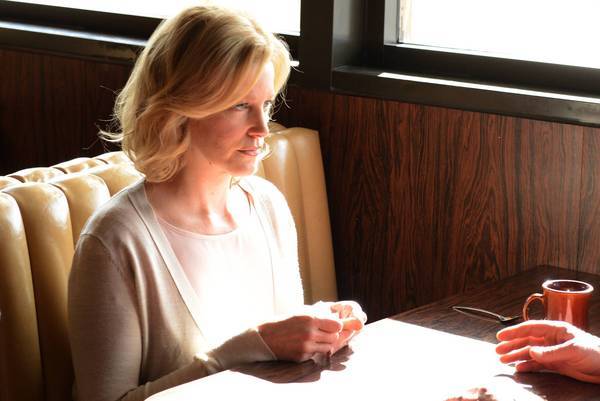 An elderly man walks to his old pickup truck in the wee hours of the morning and spots the bundles of money that Jesse tossed from his car.  As he follows the trail of bundles, he walks towards a playground,  finds Jesse’s crashed car with a bag of cash inside and spots Jesse, sprawled across a merry-go-round.

Walter is walking away from Hank’s house, following their confrontation,  and tries to call Skyler to warn her about Hank’s suspicions.  When he can’t reach her, he realizes that Hank is already on the phone with her.  Skyler meets Hank at a diner and Hank begins to tell her how sorry he is for her predicament, that he knows what a monster Walt is and how he’s going to help her.  First, though, he’d like Skyler to record a statement, detailing everything Walt’s involved in.  Skyler isn’t quite grasping just what it is Hank wants, so she asks him if she should have a lawyer with her before she says anything.   Then you see it, the moment when Skyler knows that Hank doesn’t really have anything unless she lays it all out for him.  She then causes a scene, screaming “Am I under arrest?”, over and over until she can break free from Hank and get the hell out of there.

In the meantime, unable to reach his wife, Walter is now sitting in Saul Goodman’s office and the attorney is trying to get Jesse on the phone.  Leaving message after unanswered message, Saul relays one more in what is supposed to pass as a secret code, “The monkey is in the banana patch, capisce?”  As for the Hank problem, Saul asks.  “Have you ever considered sending him on a trip to Belize?”  “Belize?” Walt says. “Belize, where Mike went to,” Saul answers.  Walter won’t hear of it – killing family is where he draws the line. He then sends his two “helpers”, Huell and Kuby, to the storage unit to load up the pile of money inside and get it out of there before Hank moves in.  Huell takes a moment to rest his enormous frame on top of the cash, like he’s trying out a Sleep Number Bed, causing Kuby to tell him to get up: “We’re here to do a job, not channel Scrooge McDuck.”

Marie, who’s been told by Hank about Walter, visits Skyler at the White’s house.  She asks her sister if it’s true, if she knows what Walter has been doing.    Marie is anxious and scared and demands to know if Skyler was aware of her husband’s crimes before Hank was shot.  When Skyler says that she’s sorry, Marie slaps her with all she’s got – it’s about as good as Hank punching Walter.  She tells Skyler that the reason she won’t talk to Hank is that she thinks Walter will get away with what he’s done – inferring that Skyler thinks her husband is smarter than Hank.  Marie then gets up and tries to take little Holly with her, to get her away from Skyler.  Skyler fights for her baby and Hank walks in, taking Marie outside, after she hands the baby back.    In the driveway, Marie says to Hank, “you have to get him.”  There’s so much more behind that slap and Marie’s words to her husband.  It has to be coming from years of feeling inadequate next to her sister, for all of the kindness that she and Hank showed to Walter and Skyler.  The Schraders have been hurt and betrayed by the people they cared about the most.

Huell and Kuby have all of the money from the storage van in barrels in the back of a van.  Walter drives into the desert and begins digging a hole large enough to hold the barrels of cash.  Hours later, he finishes and memorizes the coordinates, latitude and longitude for the site before smashing the GPS.  He goes home, where Skyler is waiting for him and puts a lottery ticket with the GPS coordinates on his refrigerator.  She assures him that she said nothing to Hank.  Walter starts a shower, begins to undress and collapses on the bathroom floor.  He wakes up there, with a pillow, a blanket and his wife hovering over him.  Having been told by Hank, she asks, “It’s true. The cancer’s back? Is this it?”.   “Does that make you happy?” Walt asks. “I can’t remember the last time I was happy” she says.  Walt tried to tell her that perhaps he should just give himself up, to save the family, that it was his own fault that Hank found out, and that she should keep the money, just to make sure that none of what he did was in vain.  She says that Hank really doesn’t have enough information to make a case against Walter, that he’s only got his suspicions, and  all they have to do is keep quiet.  For those few moments, Heisenberg didn’t exist, and Walter and Skyler looked as if they really are in this together – come hell or high water.

Lydia, having lost Walter as her Top Chef, is doing business with Declan and his crew.  They take her out to the desert, blindfolded, to show her their underground lab.  She takes a quick look, and tells them that it’s as inferior as the meth they’re making and that they should consider hiring Todd as he was trained by Walter.  They turn her offer down.  Loud voices are heard from above and the men go upstairs to find out what’s going on whole Lydia stays below.  She sends a text from her phone, then there’s the  sound of dozens of gun shots.  Lydia covers her ears and only comes out when she’s told it’s safe to do so.  The one leading her out is none other than Todd, the very same Todd who killed Drew Sharp after the train robbery.  He, his uncle and a few other members of their gang have killed Declan and his entire organization.  Lydia doesn’t want to see the carnage, even though she’s the one who hired this bunch of Aryan skinheads to do the job, and Todd tells her to close her eyes.  I don’t know what world she’s living in, but casting a blind eye to what really happens in the world of drugs making and dealing is sort of laughable.   Did she really think that wearing her business suits and shiny Louboutins would insulate her from the underbelly of the business?  Whatever she has in mind for the future of her drug trafficking, she’s just jumped out of the frying pan and into the fire.  Not only is Todd a cold-blooded killer and without a conscience, but his family and friends are the same guys responsible for killing Mike’s men – on Walter’s orders.

Marie and Hank are at odds over whether to tell the DEA about Walter.  While she’s insisting that her brother in law be made to pay for his crimes, and wondering aloud if her husband is Lone Wolf McQuade, Hank has other worries.  He tells Marie that the day he reveals who Heisenberg really is will be his last day on the job.   Having been ridiculed before by his peers, Hank knows that he’ll be completely humiliated when they found out that the drug king-pin he’s been chasing for a year is his brother in law.  Marie says that if he doesn’t tell, and they find out some other way, he could be arrested, too.

When he goes back to the office, after his week long absence, his former partner, Gomie, is there to greet him.  After he’s brought up to speed on what’s been happening and how his schedule for the day looks, Gomie mentions that Albuquerque P.D. has Jesse Pinkman in custody, thanks to his night of money tossing.  Hank meets up with the two investigators, who are getting nowhere and nothing out of Jesse, and asks them for a couple of minutes alone with him.  Jesse didn’t say a word during this entire episode, and now he’s about to face the man who he hates more than anything.