I have some ‘splainin’ to do.  I had every intention of writing a post for Sunday morning and then it didn’t happen.  I stayed up half the night watching the Olympics.  Our late local news started at midnight, the Games started up again after that and Sunday morning started a little late for me.  That still doesn’t explain why it’s taken me all day to write this, though.  You see, as soon as I drank more than a couple of cups of coffee, enough so that I could see again, I turned on the television and started watching the Olympics again.   I’ve been walking around the house, armed with three remote controls, so that I could turn on a television in the closest proximity to whatever room I was in at the time.  I’ve also faked cleaning the house by sitting in front of one of those TVs, my remotes holstered and at the ready, while I let the vacuum cleaner run – you actually can clean a few square feet of floor while seated in a recliner or on the couch.   Whenever my in-house cyber-stalker happened to walk by, I told him that I was so exhausted from all of the work that I just had to sit down.

Now, most of the sports I’ve seen wouldn’t mean much to me at any other time of the year.  I’m sure that the networks carry a lot of them on a regular basis.  Every four years, though, I suddenly find myself watching things like table tennis, water polo, badminton and canoe slalom  as if I had money riding on the results.  The only, and therefore, the best explanation I can come up with is that I simply love the Olympics.  For the next two weeks the world’s attention is on something other than who’s running for office, which countries are at war and  who will end up with Michael Jackson’s money.  It’s not that those things aren’t being covered by the networks, it’s just that they seem softened somehow – as if those 10,500 athletes are ambassadors, not only for sports, but for the very same countries still dealing with war, strife and politics.

As much as the opening ceremony seemed, at least to me, to be more than a little puzzling, there were moments that had to make us laugh and cry a little.   I thought it went off perfectly, but I didn’t understand very much of it at all.  The aerial view, especially as the athletes walked in, made that landscaped hill look like a giant ant farm.  I didn’t know what to make of the children in hospital beds, being tended to by dancing doctors and nurses, as nightmarish monsters careened around the stage.  I think this was Great Britain’s “Healthcare – The Musical”.    I’m happy that they’re happy with their healthcare system, but the giant baby at the end would have given me nightmares, too –  I don’t care how many of those Mary Poppins happened to be nearby.

I liked the little video starring Queen Elizabeth and James Bond/Daniel Craig – the running joke now is that she is the new Bond girl.  Okay, maybe it was slightly cheesy, but I have to hand it to her for having the good humor, not only to film the scene, but to go along with the silliness of a stuntman jumping out of a helicopter in service to Her Majesty.

I was only a little disappointed by the fact that David Beckham didn’t light the Olympic Torch, but he looked damn good on that speedboat on the Thames, ensuring its safe delivery to the waiting torch of Sir Roger Bannister.  Even having the group of young athletes light the bronze petals was not only unique, but somewhat moving.  It could be that I’m getting older and more sentimental, but the symbolism of the older athletes handing the torches over to a new generation was very touching to me.

There have been a couple of glitches since the Games started.  There were hundreds of empty seats at some events, including during the highly anticipated Individual Medley event which pitted Michael Phelps against Ryan Lochte.  The Olympic officials have an explanation for those empty seats – that they were reserved for family, officials and other representatives – and weren’t used by them.  They also have a remedy by filling those seats.  They will donate many of the tickets to Britain’s soldiers.   I think that’s a nice, and appropriate solution.  Some visitors are also complaining that they can’t see the torch from wherever they happen to be because it isn’t high enough in the air.  Oh well,, can’t please everybody.  Now, if NBC could just get their act – as well as their spoilers and streaming video –  together, we’d all be happier.

I have some personal reasons for watching a couple of events.  The most important, to me, has to do with the Women’s Basketball competition.  The Olympic team is being coached by Geno Auriemma,  who happens to be the head coach of the University of Connecticut’s Lady Huskies.  The team itself includes six former members of UConn’s past championship winning teams – Maya Moore, Asjha Jones, Diana Taurasi, Sue Bird, Tina Charles and Swin Cash.    I may not know much about archery or skeet shooting, but I’ll be paying close attention to those basketball games – with a big smile and, probably, with tears of pride. 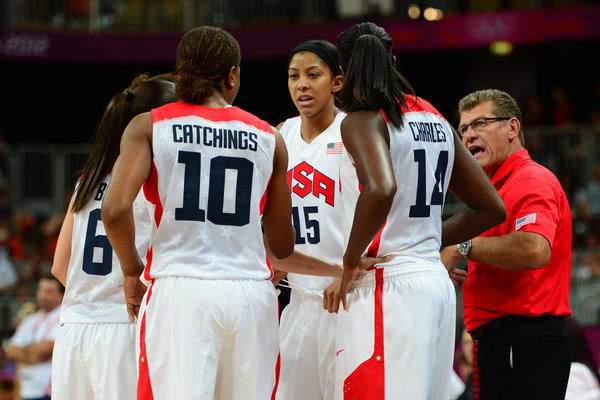 Just as an aside, as this has nothing to do with the Olympics, but has a lot to do with women’s basketball, I’ve added a link to a blog post written by Coach Auriemma’s daughter about Coach Pat Summit.  I wrote about Coach Pat a while back, and the fact that she had done everything anyone could accomplish as a coach – including her role at past Olympic Games.  If you follow the sport, then you know there wouldn’t have been anything even close to what excellence we now have – a lot of which we owe to both Pat and Geno, and that infamous rivalry.    http://theculturebarista.blogspot.com/2012/07/rocky-top-tribute-to-pat-summitt-yes.html

This entry was posted in Making Stall Talk. Bookmark the permalink.